INTERNATIONAL CUSTOMERS:  We are currently shipping to the US, US Military, Canada and Mexico.  Please read our shipping policies.

*This OVERSIZED book ships only within the United States; no international shipments* 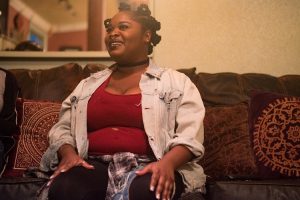 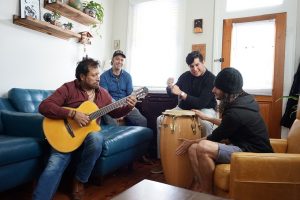 In February 2015 on a cold Carnival night, Emily Hingle got the idea to document the practice spaces of the bands and musicians of New Orleans. She had already visited some spaces where bands spend hours upon hours practicing and perfecting their craft, and she was inspired by the amount of hard work that goes into creating the music that is eventually performed on stage in front of dancing fans. These spaces and the massive effort that happens within them, she believed, deserved part of the glory garnered by the music itself.

“I feel like people love the aesthetic of music: going out to the show, grabbing drinks at the bar, dancing with your friends. That’s obviously an important aspect of music. But not as many people want to hear about how it gets made. I find the creation of it to be enthralling. Where it’s made, how long it takes, all of the emotion, arguments, and relationships that goes into it. Music isn’t made in a vacuum or out of nothing. It takes a lot of life.”

Over the course of the next five years, Emily and her photographers visited nearly 50 distinct rehearsal spaces, jam rooms, studios, and homes to photograph the spaces and interview those who work there. In Band Room: New Orleans, the reader will be a visitor in 35 such spaces speaking with the likes of Tarriona Ball from Tank & The Bangas, Big Freedia, Sweet Crude, Kumasi, The Lost Bayou Ramblers, Robin Barnes & Pat Casey, Flowtribe, and many more.

Band Room: New Orleans is 296 pages of photography and text. It is self-published and available in hardcover and softcover versions. Emily Hingle is a Louisiana native; born in Lafayette, raised in Mandeville, and living currently in New Orleans. She has always had a passion for her state’s culture, especially music. She began interviewing bands while in college at the University of New Orleans for various websites, then she started writing for Where Y’at Magazine in 2010.

“I really want Band Room to be the beginning of something bigger. I feel like it is already. New Orleans, however, will always be the best because it’s home.”